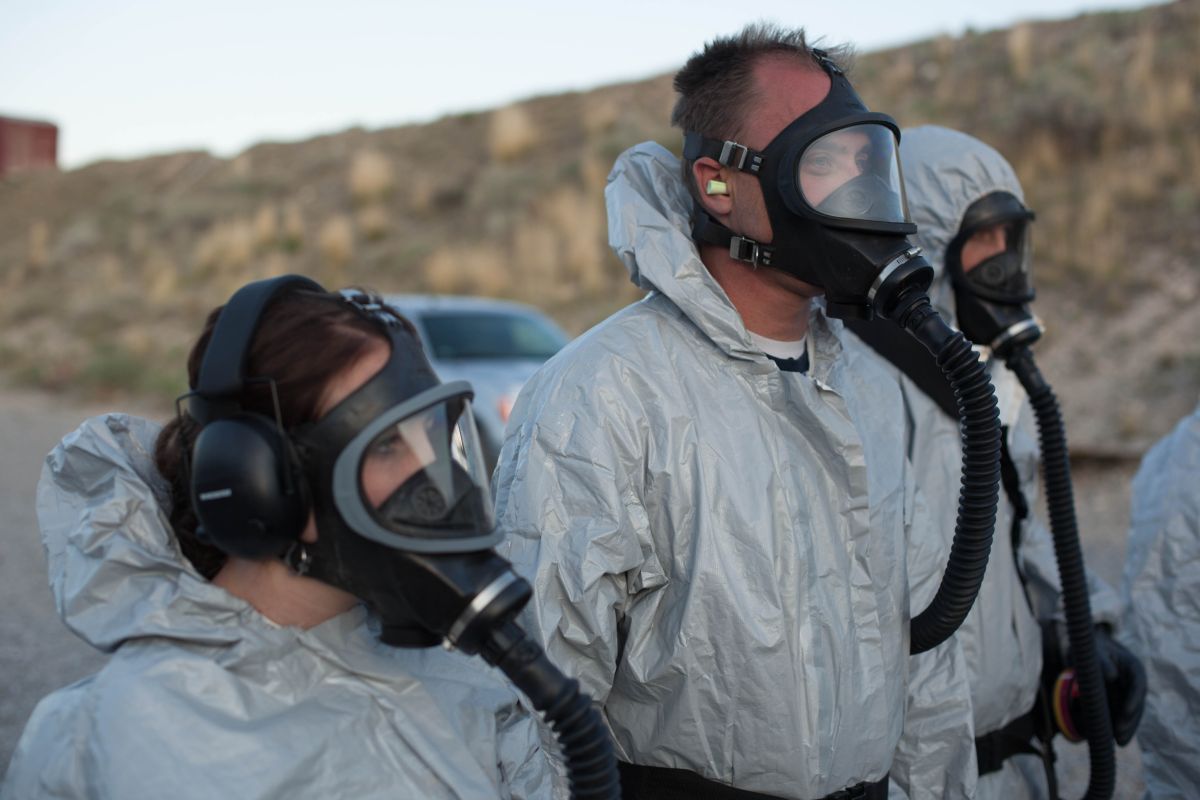 Braxton and Kara Southwick live in suburban Salt Lake City, Utah with their six children. Braxton, a mechanic proud of his family values, once rode a motorcycle professionally. He also trains his family to prepare for a gunpox attack, which he fears will bring the country to its knees.

LiveScience sat down with the Southwicks to learn more about why they are preparing for a doomsday event and what drove them to store over 907 kilograms of flour, sugar and wheat, not to mention 14 cannons and eight chickens their eight-headed To support family for more than a year.

The Southwicks star on season two of Doomsday Preppers, a show on the National Geographic Channel that introduces extreme survivors who believe the world as we know it is about to end. The Show first season was the highest rated on the network at the time. The second season starts on Tuesday (November 13th) at 9 p.m.

LiveScience: How did you start preparing?

Kara Southwick: It started out as food storage and evolved from there. In case something happened, we [knew we] could take care of our family. Our goal was a year-long supply of food. From there, think of water.

Braxton Southwick: And a generator. And a fuel reserve. And it went on and on.

KS: And a solar furnace.

LiveScience: Why did you get more extreme?

BS: I’ve seen world events happen and I’ve always been kind of a doomsday person. I don’t think the world will end in 2012, but the whole thingMayan thing got me in more. [End of the World? Top Doomsday Fears]

LiveScience: Do you think the world is fundamentally different than it was before?

BS: Absolutely. I only see the unrest across the Middle East. And to see the financial collapse with Europe and the US on the same path. Our national debt was 17 trillion [dollars] at the beginning of the year. Everyone feels that we are in unknown territory. We didn’t pay for those two wars in Iraq and Afghanistan. We put them on a credit card.

LiveScience: What are you most concerned about?

BS: We’re preparing for any scenario, but I’m really concerned about a biological terrorist attack – smallpox. It is almost impossible for terrorists to get their hands on a nuclear weapon. But getting a biological agent is relatively easy since Libya, Iraq, and Iran were involved in biological warfare.

A biological weapon could kill as many people as a nuclear weapon. It also causes fear and panic of what they want in you Terrorist attack.

KS: So America cannot mobilize and defend itself.

LiveScience: What would you do in such an attack?

BS: Retreat to our cabin in the woods with all of our gear. We have protective equipment for the whole family in the event of a smallpox attack.

LiveScience: How do people react when you tell them you are a “prepper”?

BS: You do this: [stares blankly]. They don’t know if I’m crazy or brilliant.

LiveScience: which one are you?

BS: A bit of both. My wife thinks I’m crazy. I see it this way: you have a savings account and hope you don’t have to use it for a medical emergency. We’ll do the same thing, but with food, fuel, and the coal I buried in the back yard. And generators. That’s money in the bank for us.

LiveScience: What if your fears are gone and nothing apocalyptic happens? Would you consider your preparation a waste of time?

BS: Not at all. It’s our little pet project. Some people collect china and jewelry. We collect food and other things. We will eventually use up all of our food and fuel.

LiveScience: Do you have the need or desire to get other people to prepare?

B: Definitely. We got our whole neighborhood, seven families. Almost all of them have a garden. They store groceries and some of the other activities we do.

KS: But not quite on the same level.

BS: Right. But when sh ** hits the fan, I’m some kind of leader. If you throw a scenario at me, I’ve already planned it. I think about it almost every day of my life. [The Gear You Need to Survive Doomsday]

LiveScience: If something bad happened and the earth was inhospitable to life, would you even want to survive?

KS: It is human nature to struggle to survive.

LiveScience: When you come across other people in the prep community who have insane views – like a complete reversal of magnetic poles – how do you relate to them?

BS: I think it’s funny when they choose things that are cheesy and not really possible. The Pole shift has happened before, but it really is [implausible]. It’s about preparing for anything. If you are preparing for a pole shift, you are just as prepared for a hurricane, economic collapse, or nuclear weapon. [Believers In Mysterious Planet Nibiru Await Earth’s End]

LiveScience: Why did you do the show?

KS: Everyone can start small and build on it.

LiveScience: What do you think of Hurricane Sandy?

BS: I hope everyone had at least 72 hours Survival kit in it and a three-day water supply. That would really have helped. Also in my bug-out bag [a bag you take so you can survive for a few days “off the grid”], I have a fold-out solar panel This can be used to charge a phone.

LiveScience: How do your children think about preparation?

KS: The guys love it because they love to be outside.

BS: [My daughter] Jayden says she wants to find a husband who will want to prepare. But I said, “Not in a couple of years, right? You’re only 19 years old.”

LiveScience: Braxton, you seem more interested than Kara. Did it take some persuasion to get her to agree to the show?

BS: Absolutely. It took a couple of months. She once saw me taking pictures of our grocery store to send to National Geographic and yelled at me. I pretended to be documenting it for fun, not the show.

KS: I haven’t spoken to him in about a month.

LiveScience: Why did you give in?

KS: I gave in because I thought we could teach people something. You only live once.

publisher’s Note: This article has been updated to correct a metric conversion.